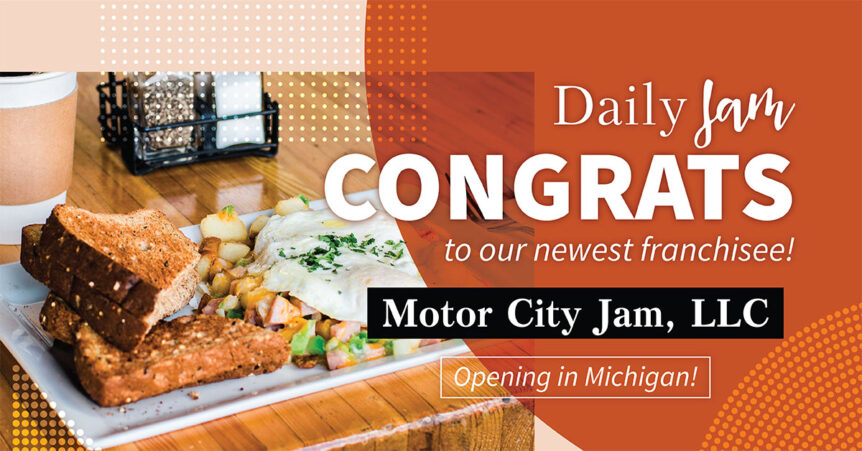 DETROIT – Known for its unique take on breakfast and lunch classics, Daily Jam announced today the signing of its first franchise agreement – a 10-unit deal stamping the state of Michigan. Metro Detroit-based Motor City Jam, LLC, an entity under the family-owned Ansara Restaurant Group, is the multi-unit franchise partner bringing Daily Jam to the state, which will be led by Victor Ansara and sons Anthony, Michael, Victor Jr. and Nicolas.

“Our family has been a fan of the brand for years, and we are thrilled to introduce the Daily Jam concept to Michigan,” said Anthony, who will lead the day-to-day operations of the group’s Daily Jam restaurants. “Since first visiting Daily Jam when visiting my brother in Arizona, I knew the concept was something special. Our plan of action is to open our first few locations in Southeast Michigan and eventually expand westward across the state.”

In addition to Daily Jam, Ansara Restaurant Group currently owns and operates 22 Red Robin restaurants throughout Michigan and Northern Ohio. The Ansara family also has three independent restaurant concepts in Metro Detroit: 2Booli, Portofino and Burgrz. Notably, Victor serves as a board member of the Michigan Restaurant Association. Ansara Restaurant Group was founded in 1961 by Andrew and George Ansara, Victor’s father and uncle, and is still run by family members including Victor and his sons.

“The Ansara family’s unmatched restaurant experience makes them the perfect partner to introduce the Daily Jam experience to Michiganders,” said Berekk Blackwell, president of Daily Jam. “We are excited for the Ansara Restaurant Group to be the brand’s founding franchisees, and to light the way as we accelerate our franchising initiative.”

It has been one full year since the dynamic, modern brunch concept rebranded from NCounter to Daily Jam as it strategically launched its franchising initiative. NCounter launched in 2011 in Tempe, Arizona, and by dishing out eggs-citing brunch favorites in a fast-casual atmosphere, it soon became a hot spot in the local dining scene. Students, families and tourists alike flock to Daily Jam locations for an appetizing and Instagrammable brunch experience.

As Daily Jam expands nationwide, it is seeking qualified franchise candidates with previous experience in restaurant operations to bring the concept to new markets. Potential candidates must also thrive in a fast-paced, energetic atmosphere.

Previously known as NCounter, the first Daily Jam location opened in 2011 in Tempe, Arizona. A fast-casual concept that’s energy and focus is on freshly served breakfast, brunch and lunch favorites, Daily Jam is the beloved neighborhood spot for breakfast items including a variety of omelets, waffles, pancakes and French toast, lunch items, hot and cold sandwiches, and soups and salads. Additionally, Daily Jam serves specialty coffees and, of course, brunch cocktails and beer. Daily Jam is a gathering place for families, friends and coworkers to connect over traditional brunch items that have been transformed through ingredients, sauces and spices. To inquire about franchising opportunities with Daily Jam, please visit https://www.dailyjamfranchising.com