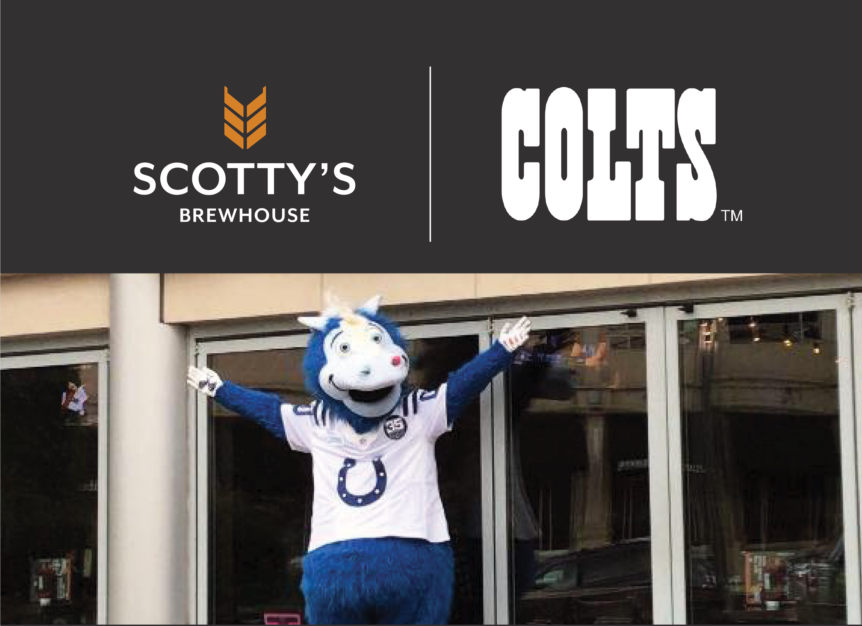 “We are very excited to team up with the Indianapolis Colts this season,” says Chris Martin, brand president of Scotty’s Brewhouse. “We will be sponsoring several events and offering promotions that we feel Colts fans will enjoy leading up to and throughout the football season. Watching NFL games at Scotty’s Brewhouse was already a Great Experience, and we feel this will help us take it to a whole other level.”

Further, Thr3e Wisemen Rocky Ripple will be featured at different points throughout the stadium.  Thr3e Wisemen Brewing Company are the beer connoisseurs behind Scotty’s Brewhouse.

Scotty’s Brewhouse kicked off their partnership by hosting the Colts 2018 NFL draft party at their downtown Indianapolis locations. Fans, cheerleaders and Colts players were on hand as the Colts announced their first round draft pick on Thursday, April 26.

On July 10, Scotty’s Brewhouse Downtown Indianapolis location will be the home to a Mascot dinner featuring Blue, the Colts’ mascot, along with some of his mascot friends from around the NFL. This event will begin at 6 p.m. and last until 8. Guests that evening will be able to interact with the mascots, take pictures and get autographs. Other mascots attending the dinner will be in town to participate in the Mascots vs. Peewees Football Game at Carmel High School on Thursday, July 12.

As the season kicks off Scotty’s Brewhouse guests will receive a two for one offer if the Colts score two touchdowns during that week’s game. The promotion will run from Sunday after the game through Tuesday of that week. Guests will be able to order any food menu item and get one free of equal or lesser value when they mention the Colts’ two touchdown offer.

Fans attending Colts’ home games at Lucas Oil Stadium will also receive an exclusive offer on the back of their ticket stubs that will be good through the entire football season, including the preseason.

“We want to reward Colts fans for dining with us,” continues Martin. “We believe these two promotions will give Colts fans something to cheer for all season long as they watch the Colts at Lucas Oil Stadium or at one of our Scotty’s locations throughout the state of Indiana.”

In addition to the game day promotions Scotty’s Brewhouse will be doing various contests throughout the year featuring Colts tickets, memorabilia and other prizes.

“We will have some fun social media promotions coming up throughout the year,” says Bruce McClain, Director of Marketing for Scotty’s Brewhouse. “We encourage everyone to follow us on social media or by downloading our app to find out all the details.”

Partnering with Great Brands to Build World Class Franchise Systems.  ZGrowth is a consulting firm specializing in managing the sales and development process of growing brands and is your outsourcing solution to growing your brand to the US and global markets.  Our advisors offer our clients more than 100 years of global franchise sales experience, including sales of $100+ million in initial franchise fees and the signing of 1,000+ US franchise agreements­­­­­­­­­­­­­­­­­­­­­­­­­­ and over 200 international Master Franchise Agreements. Contact us to learn more about partnering with us to grow your brand at https://zgrowth.com.