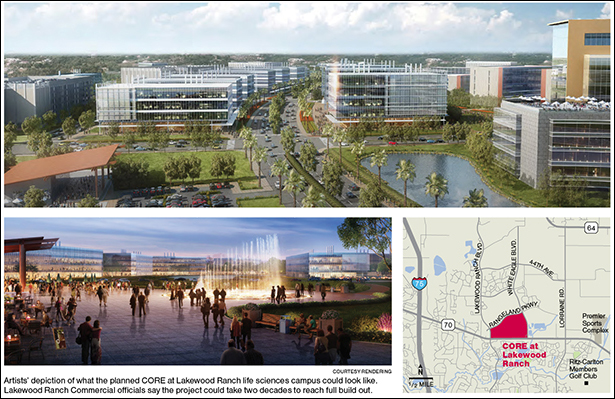 The CORE development takes shape as businesses line up to be part of a booming Lakewood Ranch economy.

As River Club’s Karen and Richard Medford discussed the possibility of buying three Sirius Day Spa franchises in the Manatee and Sarasota counties area, they put one ultimatum on the deal.

“We weren’t going to do it if we couldn’t get into The Green,” Karen Medford said.

“This is the heart of Lakewood Ranch,” Karen Medford said. “It’s a health and wellness type of center and it has just the right mix of businesses.”

Karen Medford said she loved the planned promenade and the landscaping that it incorporates. The Medford’s 3,750-square-foot spa, which will have 11 treatment rooms, will be on the opposite side of the building that hosts Earth Fare. Their front door will be at “the back” of the building that faces north.

She said that will be an advantage because it will be quiet and peaceful, facing the planned 304 luxury apartments. She said the spa should open before Oct. 1.

“The excitement of The Green, and of Earth Fare, is drawing people,” she said.

The Medfords also are looking at The Shoppes at UTC for their second location and a third most likely will find a home in Sarasota.

But it all starts with The Green.

Nick Amanatidis and Ruben Toledo, co-owners of Modern Gents Premier Barbershop & Bar at 8233 Cooper Creek Blvd, started their business at UTC, but now are headed for a shop at The Green as well.

Both Amanatidis, who hopes to open his new Modern Gents in July, and Karen Medford said they weren’t concerned that much of Schroeder-Manatee Ranch’s planned Collaboration Opportunities for Research and Exploration (CORE) development won’t be realized until the future. They believe The Green will have plenty of customers right now, and it will only expand as the CORE begins to book tenants.

Tavistock’s Joanne Ling, a senior sales and leasing associate who handles booking The Green, said she has enjoyed the project since it broke ground in May 2017.

“People can visually see what we are doing there,” said Tavistock’s Joanne Ling, a senior sales and leasing associate who handles booking The Green. “There has been an energy feeding off Earth Fare’s opening and with the announcements of the new tenants coming to the table.”

She said Tavistock has been very selective with its tenants because they want to maintain a health and wellness focus.

Construction on the luxury apartments has yet to go vertical but the ground has been cleared. Those apartments are expected to be ready for tenants late in 2019.